Artistic applications of image processing, as you already have seen in the main blog.

Developing web applications, such as a collaborative dictionary writing system Sanuri, which is being used by a group of voluntaries for writing a Meänkieli – Swedish – Finnish dictionary. Work started in 2010 and is still ongoing, two volumes have thus far been published. During the work, Sanuri has been developed and updated to better match the actual work requirements. 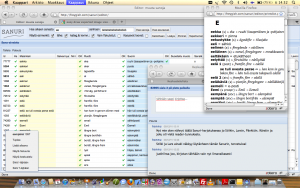 Developing and operating an automatically running internet radio station Raatiu Väylänranta (meänkieli for Radio Riverbank). I have also done some radio programs for Raatiu Väylänranta, including a series Kauempaa kattottunna (Seen from afar). The programs can be listened to from the Väylänranta Archive.

Participating in the publishing of Meänmaa magazine since 2011. Development and operation of the internet version Meänmaan Tiuku starting from 2015.

Interested in natural language processing using, for instance, python nltk. Development of a meänkieli language corpus and an online concordance, which currently exists in two versions, Korppupussi with a larger text corpus for dictionary work, and a public version Sanasäkki.

An aggregator that collects and and displays information on used accordions on sale in Finland, implemented as a sidebar to a Finnish discussion forum for accordion players and enthusiasts, see Vapaalehdykkä-foorumi

Leunartti, an interactive storybook for teaching language to small children. For this, I wrote my own animation library in Javascript so that the resulting app could be tested on a browser and the packaged into iOS and Android apps. For general information, see Leunartti info page. The test version of the app can be tried on Chrome and  Safari browsers from Leunartti web demo, although this is not as robust as the actual iOS and Android versions.

Learning about building 3D virtual worlds and environments in Unity3D: a trial project building a navigable model of the home town of my youth, see video.